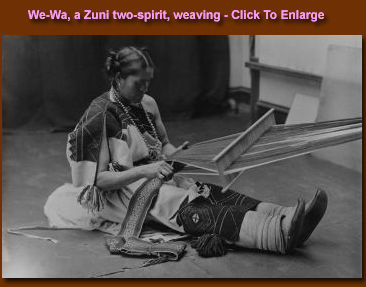 Native Americans have often held intersex, androgynous people, feminine males and masculine females in high respect. The most common term to define such persons today is to refer to them as "two-spirit" people, but in the past feminine males were sometimes referred to as "berdache" by early French explorers in North America, who adapted a Persian word "bardaj", meaning an intimate male friend. Because these androgynous males were commonly married to a masculine man, or had sex with men, and the masculine females had feminine women as wives, the term berdache had a clear homosexual connotation. Both the Spanish settlers in Latin America and the English colonists in North America condemned them as "sodomites". 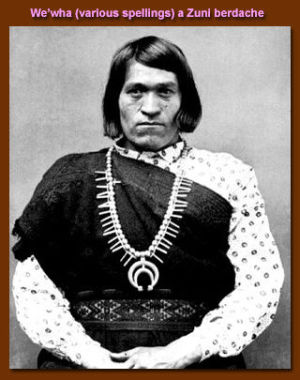 Rather than emphasising the homosexuality of these persons, however, many Native Americans focused on their spiritual gifts. American Indian traditionalists, even today, tend to see a person's basic character as a reflection of their spirit. Since everything that exists is thought to come from the spirit world, androgynous or transgender persons are seen as doubly blessed, having both the spirit of a man and the spirit of a woman. Thus, they are honoured for having two spirits, and are seen as more spiritually gifted than the typical masculine male or feminine female.

Therefore, many Native American religions, rather than stigmatising such persons, often looked to them as religious leaders and teachers. Quite similar religious traditions existed among the native peoples of Siberia and many parts of Central and southeast Asia. Since the ancestors of Native Americans migrated from Siberia over 20,000 years ago, and since reports of highly respected androgynous persons have been noted among indigenous Americans from Alaska to Chile, androgyny seems to be quite ancient among humans.

Rather than the physical body, Native Americans emphasised a person's "spirit", or character, as being most important. Instead of seeing two-spirit persons as transsexuals who try to make themselves into "the opposite sex", it is more accurate to understand them as individuals who take on a gender status that is different from both men and women. This alternative gender status offers a range of possibilities, from slightly effeminate males or masculine females, to androgynous or transgender persons, to those who completely cross-dress and act as the other gender. The emphasis of Native Americans is not to force every person into one box, but to allow for the reality of diversity in gender and sexual identities.

Most of the evidence for respectful two-spirit traditions is focused on the native peoples of the Plains, the Great Lakes, the Southwest, and California. With over a thousand vastly different cultural and linguistic backgrounds, it is important not to overgeneralise for the indigenous peoples of North America. Some documentary sources suggest that a minority of societies treated two-spirit persons disrespectfully, by kidding them or discouraging children from taking on a two-spirit role. However, many of the documents that report negative reactions are themselves suspect, and should be evaluated critically in light of the preponderance of evidence that suggests a respectful attitude. Some European commentators, from early frontier explorers to modern anthropologists, also were influenced by their own homophobic prejudices to distort native attitudes. 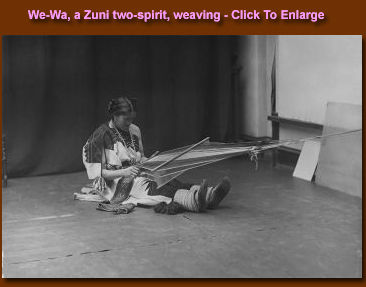 Two-spirit people were respected by native societies not only due to religious attitudes, but also because of practical concerns. Because their gender roles involved a mixture of both masculine and feminine traits, two-spirit persons could do both the work of men and of women. They were often considered to be hard workers and artistically gifted, of great value to their extended families and community. Among some groups, such as the Navajo, a family was believed to be economically benefited by having a "nadleh" (literally translated as "one who is transformed") androgynous person as a relative. Two-spirit persons assisted their siblings' children and took care of elderly relatives, and often served as adoptive parents for homeless children.

A feminine male who preferred to do women's work (gathering wild plants or farming domestic plants) was logically expected to marry a masculine male, who did men's work (hunting and warfare). Because a family needed both plant foods and meat, a masculine female hunter, in turn, usually married a feminine female, to provide these complementary gender roles for economic survival. The gender-conforming spouse of two-spirit people did not see themselves as "homosexual" or as anything other than "normal".

In the 20th-century, as homophobic European Christian influences increased among many Native Americans, respect for same-sex love and for androgynous persons greatly declined. Two-spirit people were often forced, either by government officials, Christian missionaries or their own community, to conform to standard gender roles. Some, who could not conform, either went underground or committed suicide. With the imposition of Euro-American marriage laws, same-sex marriages between two-spirit people and their spouses were no longer legally recognised. But with the revitalisation of Native American "red power" cultural pride since the 60s, and the rise of gay and lesbian liberation movements at the same time, a new respect for androgyny started slowly re-emerging among American Indian people.

Because of this tradition of respect, in the 90s many gay and lesbian Native American activists in the United States and Canada rejected the French word berdache in favour of the term two-spirit people to describe themselves. Many non-American Indians have incorporated knowledge of Native American two-spirit traditions into their increasing acceptance of same-sex love, androgyny and transgender diversity. Native American same-sex marriages have been used as a model for legalising same-sex marriages, and the spiritual gifts of androgynous persons have started to become more recognised.

Walter L Williams is the author of The Spirit and the Flesh (Boston: Beacon Press) and is Professor of Anthropology, History and Gender Studies at the University of Southern California.

His most recent book is "Two Spirits: A Story of Life with the Navajo"