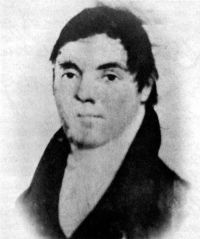 Cuthbert Grant (1793 - July 15, 1854) was a prominent Métis leader of the early nineteenth century. Cuthbert was the son of a Scottish father and Woods Cree Métis mother. He was born in 1793 at Fort Tremblante, a North West Company trading post located near the present-day town of Kamsack, Saskatchewan, where his father was the head Factor.

In 1801 at the age of eight, he was sent to Scotland to be educated. It is not known exactly when he returned to the West, but in 1812, he entered the service of the North West Company at the age of 18. He then travelled with the Spring Brigade to Pays d'en haut, the "high country" of the Northwest.

He was recognized as a leader of the Métis people, and became involved in the bitter struggle between the Nor'westers and the Hudson's Bay Company stemming from the Pemmican Proclamation, which forbade anyone from exporting pemmican from the Red River Colony. 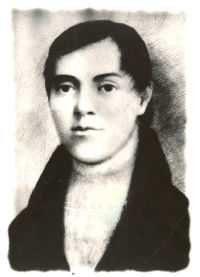 The capture and destruction of the North West Company's Fort Gibraltar in 1816, caused further anger at the HBC from the Nor'westers and the local Métis. This led to the bloody encounter known as the Battle of Seven Oaks, where Governor Robert Semple and 21 colonists from the Red River Colony were slain.

Despite this, when the two rival companies merged in 1821 under the name the Hudson's Bay Company, the new governor, Sir George Simpson, requested Grant to head a Métis settlement of some 2,000 people situated some 16 miles west of the Red River settlement on the Assiniboine River. The settlement was to be known as Grantown for many years, but in more recent times was renamed St. Francois Xavier after the patron saint of the town.

By 1825 wheat was becoming an important food crop and although there were several windmills in operation in the area, Cuthbert Grant was the first to undertake the construction of a watermill. His mill was completed on Sturgeon Creek in 1829. While the exact location is not known, it is probable that it was close to where the Portage Trail crossed the creek; and it is altogether likely that the dam was used as a bridge for crossing the creek during the season of high water.

Unfortunately the dam proved unequal to the spring floods and for three successive years it was washed out. Grant finally abandoned the site and moved his machinery to Grantown where he constructed a successful windmill.

In 1828, the Hudson's Bay Company placed him in charge of the defence of the Red River Settlement. He later became a sheriff and magistrate in the District of Assiniboia.

On July 15, 1854, Cuthbert died from injuries sustained after falling from his horse.