If you should find yourself in the Farmington, New Mexico area with a couple of hours to spare, consider visiting the Salmon Ruins and Museum. You won't need hiking shoes, bottles of water or an SUV. All you need is a bit of curiosity about old places and things--although Salmon offers plenty for the serious student of pre-Indian cultures, as well as for the casual visitor.

Wander around the museum exhibits. Visit the excellent research library (for you serious folks, its official name is The San Juan County Archaeological Research Center and Library), drive or walk down to the ruins. Or, if your taste runs to things Western, visit the old Salmon house. Bring the kids and a picnic lunch. They'll love exploring the Heritage Park which offers interactive replicas of buildings as diverse as a Wild West trading post, a Navajo sweat lodge, male and female hogans, a Jicarilla Apache wickiup and a Ute tipi. But don't miss the ruins.

A general view of the site from the great kiva. 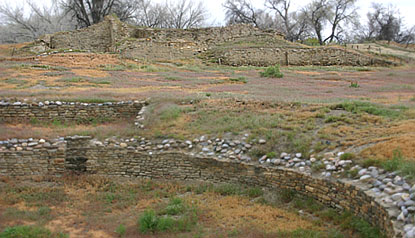 Located on the north bank of the San Juan River, the Salmon Pueblo was constructed between 1088 and 1090 A.D. Built during the same time period as many of the great houses in Chaco Canyon some 45 miles to the south-as the crow flies, not as modern roads go-this large Chaco outlier originally contained over 300 rooms on three levels. Some of the many astronomical alignments found at the site appear to have been set in place as early as 1068. But, take note: the initial structure was completed in just two years. This is certainly a tribute to the organization, technical skills and social complexity of the Chaco People, who carried trees from up to 50 miles away and rock from as far as four miles for building this pueblo.

Then, after just 25 to 30 years, the primary Chaco inhabitants abandoned the site. No one knows why. Did the climate change? Did political ties dissolve leaving them isolated? Was there an outbreak of disease? At the moment there are more questions than answers.

Around A.D. 1160 Ancestral Pueblo people began what is known as the "Secondary Occupation" of the pueblo. According to Salmon Curator and Education Coordinator Nancy Sweet Espinosa, new research indicates that the Ancestral Puebloans occupied the pueblo together with other peoples in the area in kind of cultural melting pot.

View of some of the rooms on the west side of the ruins. 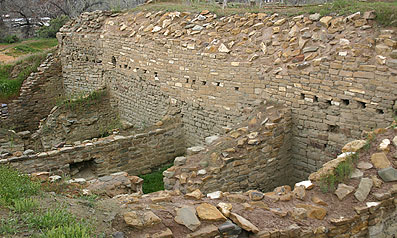 During the Secondary Occupation a great deal of structural modification was made to the pueblo, such as building circular kivas within rooms that were originally square. The self-guided tour will show you some of these rooms. Salmon remained the largest pueblo on the San Juan River until it was finally abandoned about 1265 A.D.

Visitors follow well-marked paths that wind around and through the excavated ruins. Look into kivas, storage and work rooms, ceremonial chambers. Climb down into a gallery room and kiva.

For those who are curious about pre-Indian history, the varied peoples who made the Salmon Pueblo their home offer an interesting study in architectural styles and cultural evolution.

Nancy Sweet Espinosa describes the Salmon Pueblo as containing examples of various types of Chaco wall construction and masonry styles. Methods of construction include single wall and compound wall as well as the hallmark Chaco core and veneer construction. Core and veneer or faced walls have a rubble core sandwiched between two facings of rock.

One of the unique features of Chaco style masonry or wall facings is the labor intensive method used. Each stone was cut to fit its location in the wall, giving a refined and sophisticated appearance. The various masonry styles seen at Salmon Pueblo include the McElmo or Mesa Verde style. The latter is unlike Chaco type walls because instead of hand shaped stones, McElmo uses large, unshaped stones placed where they seemed to fit.

You may ask why many different styles of masonry came to be present in one wall. Espinosa says that what determined style was availability of water and building stones. It's believed that the sandstone used at Salmon came from a quarry about three miles north of the pueblo. Where supplies of stone and water were both available, you see courses of large stones held together with a heavy layer of mortar. As one or the other resource became depleted, variations in wall facings occurred. When both water and stone became scarce, you see small, fitted stones with little or no mortar at all.

Example of a Chaco style core and veneer wall. 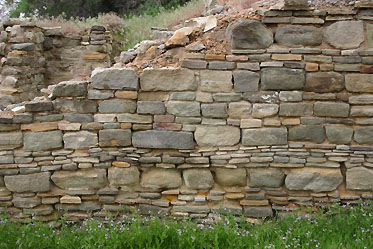 Salmon owes its remarkable state of preservation to the Salmon family who homesteaded the area. The house and orchard of George P. Salmon, son of the original homesteader Peter Milton Salmon, is located just north of the ruins. The Salmon family protected the ruins, so that when excavation started in 1970, a wealth of unique artifacts came to light. You'll see some of them in the display area.

Exhibits in the display area help to recreate the life of the Chaco and Ancestral Pueblo peoples who once lived in this great house. There's also a gift shop where you can shop for books about this fascinating area and Native American pre-history, as well as for modern Native American jewelry and crafts.

Beginning in the fall, the Salmon Ruins Occasional Lecture Series offers free talks on the ruins and related topics. And throughout the year (weather permitting) you can book "Journey into the Past Tours" to Chaco Canyon and to the Dinetah rock art and pueblitos.

Created by a county bond issue in the late 1960s, Salmon is governed by the San Juan County Museum Association. Conditions attached to the lease/purchase agreement of the site included finding a qualified scholar to investigate and excavate the ruin, building a museum that would serve the pubic through visitation, educational programs and creation of a library, and, that the museum was to become almost entirely self-supporting. As of this date, all three conditions have been met.

When the San Juan County Museum Association decided to hire an anthropologist to excavate the ruins, they made their own contribution to history by hiring Dr. Cynthia Irwin-Williams, one of the first women in any field to receive a doctorate directly from Harvard University, rather than from their associated women's college, Radcliffe.

Drawing on her background in anthropology for her excavation of the Salmon Pueblo, Dr. Irwin-Williams used innovative methods such as controlling stratigraphic relationships within and between rooms, and integrated ethnobotany, as well as experimenting with computerization of field data, all of which were then considered avant-garde.

The Salmon Ruins, Museum and Research Library are located at 6131 U.S. Highway 64 in Bloomfield, New Mexico.

About the author: Lynne D. Escue is a free lance writer whose credits include articles in New Mexico Magazine and History Today.