The Legend of the White Horse Plain

The Legend of the White Horse Plain by Margaret Arnett MacLeod

This article was published originally in Manitoba Pageant by the Manitoba Historical Society on the above date. We make it available here as a free, public service in hopes it will continue to be useful. Gateway to the west is a name frequently used to designate the city of Winnipeg, since it stands on the eastern edge of the Canadian prairies.

The city looks west over a small area which was known as the White Horse plain. There, in the lee of a ridge to the west and north, the hamlet of Grantown was founded in 1824. This nucleus of settlement, 18 miles west of present day Winnipeg, was later renamed and is today the village of St. Francois Xavier.

The ridge was early called the Coteau de Festin, since from time immemorial it had been noted as a gathering place for the Indians - a place where they held dog feasts, sun dances and other celebrations.

This beginning of the western prairies is a storied place, the only area around Winnipeg which has left us a legend - the legend of White Horse plain. For more than two and a half centuries this region has been called the White Horse plain. It carried that name for more than 50 years before the first white man set foot in the west, for over a hundred years before Manitoba existed; for so long indeed that the actual occurrence which named it has been almost forgotten by its people, leaving only the legend it engendered.

The legend as given here is the version which was most widely corroborated for me by old residents of White Horse plain and others.

In an early period of the seventeenth century, when only Indians roamed the western plains, the most northerly nation, the Crees, were being pushed farther and farther towards Hudson Bay by their traditional enemies, their fierce neighbors to the south, the Sioux.

Finally the Sioux gained a foothold in the wealthy Cree country as far north as Lake Winnipeg and the point north of the tip of Lake Superior, now known as Sioux Lookout. It was a serious situation for the Cree. They were desperate. In this barren land they faced near starvation and possible extinction. Then came their salvation, the arrival of the white men at Hudson Bay with whom they soon began to trade. Before long they had the white man's guns and were making effective war with them against the bows and arrows of the Sioux. So the invaders in turn were pushed farther and farther back into their own territory, and the Cree became the great warriors, more invincible than ever the Sioux had been.

As a consequence of this, the Crees' nearest neighbors to the south, the Assiniboines, a branch of the Sioux who formerly had protected the Sioux from the incursions of the Crees, were glad not only to make peace but later to ally themselves with this powerful and irresistible nation which fought their enemies with fire.

Against this alliance the Sioux, though flaming inwardly, could do nothing. Nevertheless they kept a jealous eye on the movements of both.

Early one summer in the 1690s, a large band of Assiniboines was camped on the banks of the Assiniboine river about ten miles west of the centre of present day Winnipeg. The chief of these Assiniboines had a beautiful daughter, and to his lodge came two suitors for her hand - a Cree chief from Lake Winnipegosis and a Sioux chief from Devil's Lake.

The Cree was the favored suitor for he had to offer in exchange for a bride that rarity, that coveted prize of the prairies, a horse as white as the winter snows, a Blanco Diablo which came from that famed breed in Mexico. Nimble of foot, swift as the wind, strong and sturdy, a "white devil" could out-run and out-last any other horse, and go three or four days longer than any other without food or water.

The prospect of such a gift was irresistible, and the father succumbed. But not all the Assiniboines in the camp favored the alliance with the Crees, notably a powerful medicine man. The memory of Cree war parties with Assiniboine scalps flying in the wind was ever before his eyes and he nursed in his heart the old bitterness.

"Is it not enough", he thundered at his chief, "that you should make peace with the enemies of our forefathers? Now you will disgrace us by mingling our blood with that of our foes!" But his protests were in vain. So he sought by his magic and exhortations to strengthen in the camp the hatred against the Crees.

The marriage was planned for a time when the Sioux chief was to be on a war expedition, but they counted without the medicine man. Secretly he sent off word of his rival's success to the young Sioux.

On the day appointed for the ceremonies, the Cree bridegroom, gorgeous in the trappings of his chief-dom, arrived from Lake Winnipegosis mounted on a fine grey steed, and leading the white horse loaded with additional presents for his prospective father-in-law.

The gifts were presented and the Cree claimed his bride. Then, with the feasting and merrymaking scarce begun, suddenly there was an alarm - a cloud of dust in the distance. The flouted and vengeful suitor with an escort of Sioux warriors was fast approaching over the prairie.

All was confusion in the camp. Cries of Sioux and Cree sympathizers alike filled the air. "Up, up! Away! It is your only chance!" cried the bride's father to the Cree. "Take your horses and flee!"

The bridegroom ran with his bride to the tethered horses, helped her mount the white steed, jumped to the grey in a flash and they were off. Westward they flew, but not unobserved. The Sioux with his party was quickly in pursuit.

But even the time gained at the start and the swift pace of their fleeing ponies did not save the bridal couple. Though they doubled back on their tracks to mislead their pursuers and at times were hidden by patches of bush, once out on the open plain again the white horse was the mark that betrayed them.

On, they sped over the prairie. The frightened girl held back the pace of her horse to that of her husband's grey, and the Sioux were gaining on them.

Finally at a point just east of the present day village of St. Francois Xavier,the avenging arrows of the Sioux sped to the hearts of the fleeing couple and killed them both.

The grey horse was wounded, but the white steed escaped into the deep woods. For years it roamed the plain, thus giving its name to the region, and the Indians, believing that the soul of the girl had passed into its body, feared to approach it. As time passed the belief grew that, in ghostly form the white horse continued its wild wanderings.

Today there are old residents in the district who recall the tragic story of the Cree chief and his Assiniboine bride, and relate the legend of the Blanco Diablo, which some believe still haunts the Plain. 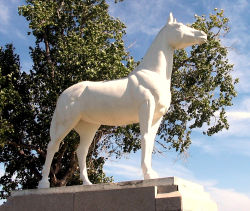